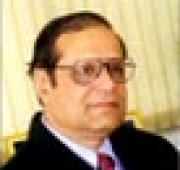 Kinetic Group Chairman Arun Hastimal Firodia, an Alumnus of IIT Bombay (B.Tech. 1965, Electrical Engineering) has been honored by the President of India with the Padma Shri award on Republic Day in the trade and industry category.

Arun H Firodia started the flagship company, Kinetic Engineering Ltd.  He is at present the chairman of the Kinetic Group. He developed, India's first totally indigenous moped - ‘Luna’, which became an instant hit with the consumers in the 70's and 80's. He is also credited with introducing one of the most advanced scooter models in India in a joint venture with the Honda motor Company in Japan. He has collaborated with world renowned companies such as Hyundai, Taigene, Sciaky, Daewoo, San Yangetc. for manufacturing of advanced technology products. Mr Firodia can truly be considered the pioneer in putting affordable mobility within the reach of the Indian population and for bringing convenience and refinement to scootering by giving modern day shape, scale and scope to the Indian two-wheeler industry.

A highly qualified professional Director and Industrialist, Mr. Firodia previously served as Joint Managing Director of Kinetic Engineering Limited. Mr. Firodia has gained a rich experience of more than 38 years in automobile industry. He founded Kinetic Group (also known as Firodia Group of companies) and serves as its Chairman. Mr. Firodia serves as an Executive Chairman of Kinetic Motor Company Limited. He served as the Chairman of ZF Steering Gear (India) Ltd. until July 14, 2010. He is one of the most respected industrialists in India. He is widely acknowledged as a visionary and a Technocrat. In a career spanning 30 years, he has been a visionary and pioneer who has introduced several new ideas and technologies into the Indian automobile industry.

Mr. Firodia's dedicated efforts have also led to starting up and nurturing of many of today's automotive suppliers. He has also been instrumental in setting up the new Auto Cluster in Pune, expected to give a boost to the Indian automotive industry.

Apart from a  B. Tech in Elec. Engg from IITB he is also been conferred with the Distinguished Alumnus Award for his contributions to Indian Industry, Academia and Society. Mr. Firodia also holds a Masters in electrical engineering (MS) from the Massachusetts Institute of Technology and an MBA (MS in Management) from the Sloan School of Management. He has been conferred MIT (Massachusetts Institute of Technology), Alumnus Award (2007) for distinguished achievement and exceptional service to Country, Society and MIT.