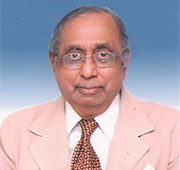 Dr. P.R. Dubhashi had a brilliant academic career. In 1946, he stood first in matriculation examination conducted by Bombay University, in the entire Bombay province which then included Maharashtra, Gujarat and Karnataka territories winning many prizes and scholarships. He obtained M.A. of Pune University, standing first in first class. He later was awarded Ph.D. by Pune University and D.Litt. by Bombay University. He was also awarded Post Graduate Diploma in Economic and Social Administration by the famous London School of Economics, where he studied as British Council Scholar and where also he stood first.

On the basis of all India competitive examination in which he stood very high, he joined the Indian Administrative Service. In his thirty five years of service he rendered service to the nation in various capacities. After retirement from IAS, he was invited to be the Vice Chancellor of Goa University. In this five years tenure he built the new campus of the University and placed it on sound footing.

In his administrative career, he held several important assignments in higher echelons in administration like Divisional Commissioner and as Secretary in State and Union Government at higher policymaking level. But what distinguished him from the normal run of administrative career was his contribution as the head of four national institutions of training and research during which he significantly contributed to human resource development in various sectors of administration.

Dr. Dubhashi participated in large number of conferences at national and international level in several areas – Rural and Community Development, Co-operation, Panchayati Raj, Planning, Poverty alleviation and training of public servants. He also organized many conferences for Government of India and the State Government.

He also delivered lectures on various subjects relating to Public Administration including Dr. Zakir Hussain Memorial Lecture and Dr. John Mathai Memorial Lecture.
He has not only been an illustrious administrator but also a social scientist in action. He has related thinking to action and action to thinking as reflected in twenty five books and numerous articles and papers relating to various facets of public administration and Economies which have been published in leading national news papers and journals including Indian Journal of Public Administration, International Journal of Administrative Sciences, Economic and Political Weekly, Mainstream and Freedom First.

Even after retirement of thirty-five years of service in IAS, he continued to serve the country in various capacities including as member of the Expert Committee on Rural Finance appointed by NABARD and as a Chairman of the Committee on Management Institutes appointed by the Pune University.
During 1995 he served as the Vice Chancellor, Goa University. He built it in it’s formative years. His services were widely appreciated in Goa.

He headed and served many expert groups and committees appointed by Government of India. He was also a consultant to IFAD and Asian Development Bank and gave reports on many countries including Nepal, Burma (now Myanmar), Sri Lanka, Philippines, Malaysia and Tonga. He has authored twenty one books in English and six books in Marathi and numerous articles, both in English and Marathi in several leading journals and newspapers on a variety of subjects covering economics and planing, politics and public administration, rural developoment and co-operative, education and social issues. He is widely travelled and has visited countries like USA, UK, Germany, France, Italy, Switzerland, Mauritius, Tanzania, Nigeria, Libya, Nepal Sri Lanka, Malasia, Singapore, Indonesia, Tonga, Japan, South Korea, Australia and Newzealand.

All in all, Dr. Dubhashi has made multi-dimensional contributions to the country in various capacities.